Hi folks, Alec here - as of December 7, Aquaria has been released for a year. We want to thank all the people who chose to buy the game and support us. You’re the reason we’re still around, and we really appreciate it. You’re also the reason why we’ve been able to continue to work on improving the game, and soon you’ll be able to experience the result of those efforts.

This weekend we’ll release the new Windows version of Aquaria, 1.1.1. This version includes widescreen, graphics and audio enhancements, improved puzzles, a new/awesome map system and more. It even improves on the recently released Mac version - and it will be released at a new price.

And last but not least, we’ve made a new trailer to celebrate. This one was made in 1280×720, and looks absolutely gorgeous. The files involved in making it are taking up about 82GB of my hard drive! You can check out the embedded video here at standard def, but head to YouTube or Vimeo for the option to watch it in HD. If you want the original source AVI file, just send me an email (zaphire@gmail.com) and I’ll hook you up. 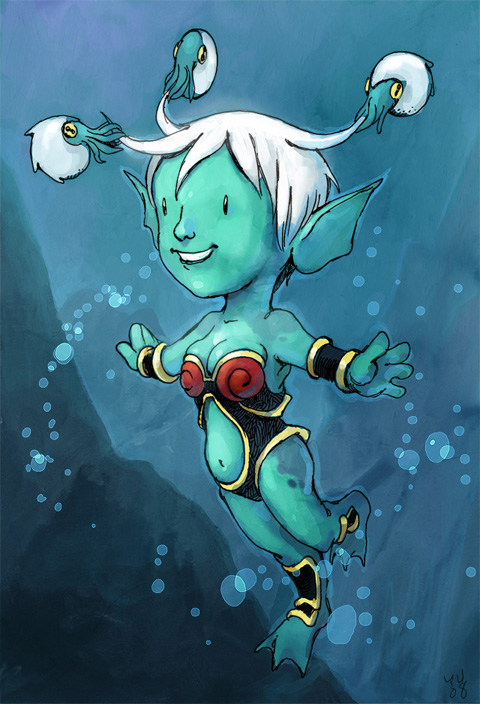 Thank you for your patience, Mac users! Its Alec here, letting you know that Aquaria for Mac has been released today. Go play the demo and buy the Mac version for $30 over here at the Ambrosia website. (Beware, there may be some spoilers in the screenshots on there. They may be spoiler free in a bit though! I’ll update this post when I know.)

But this is not just a straight port of the Windows version, oh no - Aquaria for Mac includes nearly a year of work in new features, bug fixes and improvements - bringing the version number up from 1.0.3 to a big shiny 1.1.0. With new and beautiful wide screen support; a new world map system complete with progress recording, location names, user-created markers and beacons, user-friendly improvements to the cooking system, changes to make puzzles more intuitive, additional graphics, auto updates, a built-in help system - and more! Even some of the music tracks got a bit of polish.

In fact, these features will be exclusive to the Mac version of Aquaria while we put together a beta test of the new Windows patch. I also like to consider this temporary exclusivity a small gift to our patient Mac fans who have waited many months! You folks really deserve it.

But there are more people to thank, specifically some very helpful employees over at Ambrosia software who did a lot to make my workload more manageable. I’d like to single out John Champlin, for testing the game probably a 100 times, demoing it at Macworld and for helping manage the beta list. I’d also like to thank Matt Slot, Mike B. and Rudy Richter who did a lot of the Cocoa programming involved in creating the start-up sequence and GUI launcher for Mac Aquaria, as well as giving me help figuring out how to support older Macs. A huge thank you goes out all the Beta testers who went through the game countless times to be sure that issues were fixed, and for coming up with some good suggestions on how to improve the game. Also, a big thanks to Derek for creating new art for the game, fixing levels for widescreen support, creating a sexy OSX icon and for making the awesome painting you see on this post to celebrate the release!

Its been a crazy ride getting to this point, one filled with a lot of frustration and a feeling I’d like to call “banging your head against the wall”. A lot of that was trying to figure out how to improve the game based on feedback from players, while still keeping true to what works so well in the first version and all the love that Derek and I put into it. Turns out, it was totally worth it. Its not too often you get to sit back and watch your baby go out into the wild, crazy world. This is our second time, and I’m still excited.

P.S. I now use a MacBook Pro for all my game development purposes, and so does Derek.

At The Independent Gaming Source we ran a competition for “demakes” - remakes of games made as though they were running on old consoles. One of the entries was Aquarium, a NES demake by Oracle. Can you guess what game it’s supposed to be?

Although it’s just a short demo, Aquarium is still a wonderful re-envisioning of Aquaria. You gotta love the great pixel graphics and the chiptune version of Alec’s theme song. I’d love to see this finished some day!

So yeah, thanks so much, Oracle! And best wishes.


Side Order of Aquaria 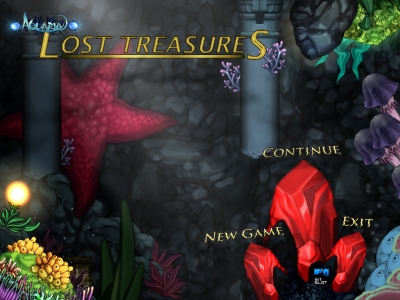 One of the coolest things about releasing your project to a widespread audience, is that you get a ton of amazing creative feedback. We’ve had some really phenomenal fan art, some fabulous cosplay and even some fan music!

But beyond that - all of the tools we used to create Aquaria are built into the game itself, and any user can make their own Aquaria side story with them. 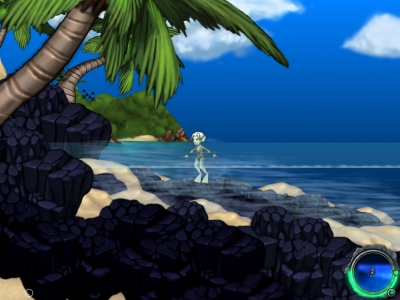 The game appears to revolve around young Naija, and features completely new areas. There are also plans for a few game play additions to the game, which should help create a fresh experience for those who have already finished the official storyline of Aquaria.

You’re very welcome to drop by the thread and offer words of encouragement - and you may even decide to offer your particular talents to the project. It would be cool to create some original music, or to help out with scripting for example! I know there are some incredibly talented Aquaria fans out there, and I’d be stoked to see what they could create if they got together.

You can find the “Aquaria: Lost Treasures” thread here.

P.S. There’s still time to apply to be on the Aquaria 1.1.0 beta test! You can check out the details here. A couple days ago I did an hour presentation about Aquaria for the local new media scene here in my home town of Winnipeg (at a pub downtown). It was kind of funny, because I wrote up pages of notes in preparation, but just ended up drinking a beer and winging it instead… and it was awesome!

The game development scene here is small, but its growing in some pretty exciting ways. If you live here, make sure you check out the events that are being organized by New Media Manitoba and Game-On Manitoba.

Let’s make this city an awesome place for game development. The time is almost here for testing on the new version of Aquaria to begin! The Mac version has just reached beta 3, and once beta 4 hits I’d like to start testing for Windows. If you’ve purchased Aquaria already and would like to help us with quality assurance on all the cool new features (including widescreen), then you’ll want to sign up for a chance to be on the beta!

I’m looking to recruit those who already own the copy of the game, with a preference towards those who have been active in the community. If you’re interested, (and who wouldn’t be) follow the instructions below to apply.

Send an email to zaphire@gmail.com with the subject set to:
Aquaria 1.1.0 Windows Tester Application
You’ll want to get that exactly right to make it easier for me to filter emails, so copy and paste!

Here are the details you’ll need to include in your email:
* Your Full Name
* Order Reference # from your Aquaria Purchase
* Computer Hardware Specifications
* Your Forum Handle, if you have one
* Short Paragraph on why you’d be an Awesome Tester!

Exceptions to the above:
If you have played the Aquaria Demo before, and ran into technical problems playing the game, (for instance, strange graphics problems or crashes on start up) by all means, sign up. I could really use your help in debugging hardware-specific problems!

Keep in mind that we’re going to pick only a few people out of all those apply, so don’t feel too bad if you don’t get picked this time ’round!

Version 1.1.0 of Aquaria includes many improvements and tweaks across the board. If you haven’t been keeping up with the blog in the last while, you can check out some of the major new features in these posts: One of the coolest things to come out of IRC, is this amazing Cosplay by a friend of forum member Romosome. Check out his full post here. They were also carrying around an Aquaria-styled “crate” with an iPod and speakers built-in, playing you-know-what.

Thanks for doing this guys! It was a very pleasant surprise.

Indie games may not have the sheer number of fans that mainstream industry games have; but we definitely have some of the most talented and creative! 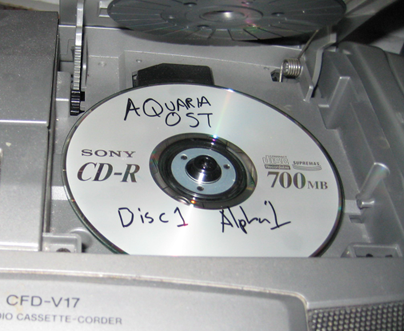 Derek and I have been working on a CD release of the Aquaria soundtrack. Its proven to be a painstaking endeavor - figuring out the best way to present the ~50 music tracks from the game, while designing some awesome packaging.

Recently I burned a CD of what I call the “Alpha 1″ build of the OST, so I could try listening through the whole thing to see how well it flows. Now I’m working on “Alpha 2″; remastering tracks, rearranging others and extending some with newly written music. It seems likely that the whole OST is going to require two discs, and there’s a good chance that I’ll write some completely new bonus tracks for the second disc.

The packaging will include liner notes with details on the creation of each track by yours truly and some great new art by Derek. We’ve been working on this one for a long time, but I think we’re finally getting there!

In the meantime, I’m still busy working on the Mac beta, and we’ve started working on a couple new things…

(or from this mirror)

Derek posted a thread on the development of Naija’s visual design on the forums. You can read the full post here. 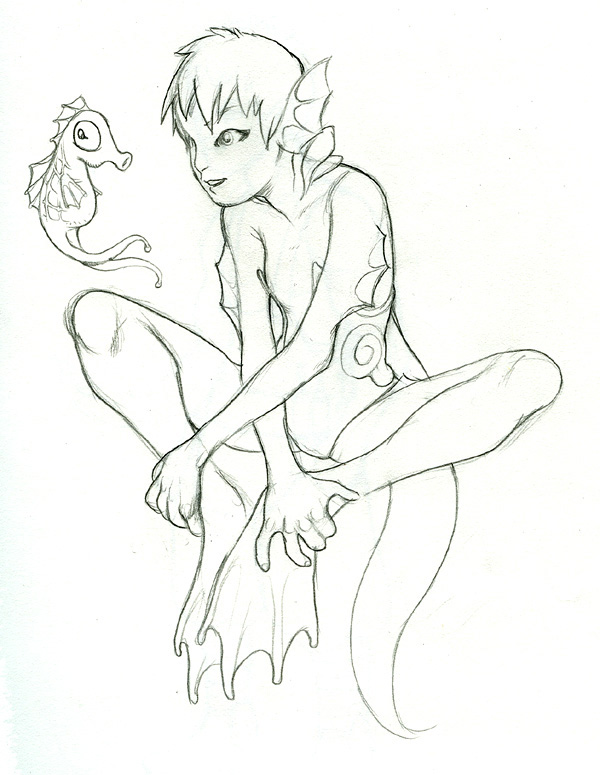 In other news, Beta testing for the Mac OSX version of Aquaria has started! Its hard to tell how long its going to take, but the game is going to be super solid when its done.

Check the extended to see a couple of the new features we’ve added to the work-in-progress version of Aquaria 1.1.0 since last time.